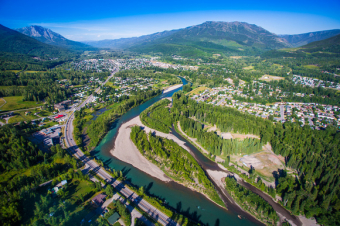 From time to time I come across Real Estate stories that are on the edge of bizarre.

I first heard about this one at Blue Heron Books in Uxbridge Ontario, when author Angie Abdou discussed her home town.

Fernie B.C. is a city of 5,000 residents fully encircled by the Rocky Mountains, tucked into the south-east corner of British Columbia. The glacial valley is drained by the Elk River with three tributaries joining it at close proximity to the town. Founded in 1898, it was largely a coal mining town right up to the 1960's when mining diverted 25km to the north. Two large fires in 1904 and 1908 decimated the city. They rebuilt.

In the 1970's as workers built an elementary school beside a fenced off cemetery, they found human remains. The site was shut down for a few days while the area was investigated. This caused the workers loss in pay so on subsequent days when they found more remains, they just pushed the bones aside and buried them again. A number of old burial sites from decades ago have long been forgotten or their boundaries blurred. It is thought that many wooden crosses may have burned during one of the two great fires in the early 1900's.

In 2008 a developer started excavation on this now demolished school in order to build a multi-million dollar neighbourhood, when his crew dug up human skeletons again.The developer didn't know how many more bones they would find so he had to disclose to the buyers. If homeowners did come across bones, the developer agreed to be responsible for removing any remains. The majority of the lots have been purchased, but the lots where remains were uncovered stayed empty.

The local funeral director and his assistant have spent the last 15 years reviewing historical records and survey maps in order to locate the remains of approximately 393 people that died in Fernie between 1889 and 1911. Locals who once knew where the graves were have passed on. Recently, ground penetrating radar equipment was used to determine where and how deep some of the lost burial plots are. The city of Fernie was also considering some kind of public memorial so that these lost souls are not forgotten.

Do you have any unique Real Estate stories? We'd love to hear about them. Please message us.